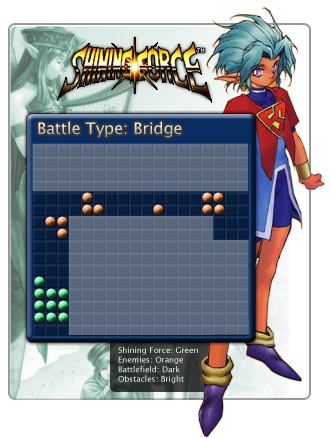 Those battles are tricky, but they're not the hardest fights you have to face in your Shining Force career. Movement is quite restricted (excluding Birdmen and the like of course) and you'll easily be trapped with magic spells.

In Shining Force 1, this fight is a little harder since the whole bridge gets affected by an enemy attack every 5 turns - so you have to send a reconnaissance group which is small enough to fit in the small gaps of the bridge that are not affected by the attack.

The situation is even worse in Shining Force 3 where a boss awaits you right behind some very narrow bridge. So you have to forget about the reconnaissance team and lure the boss out.

You don't have to face an enemy in Shining Force 2, but there are lots of holes scattered around the bridge, which makes moving forward harder.