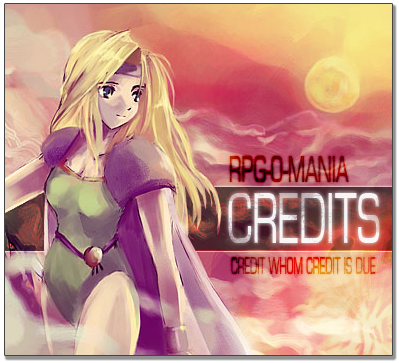 Shadowraven (2000)
Wrote many reviews and increased the amount and quality of articles here on the site.

Ikarius (2001)
Took over RPG-O-Mania after I gave it up and put much effort in this site.

Daniel B (2001)
Put rpg-o-mania to the next level by creating RPG xanadu. It's a shame the project died.

Wyte (1998)
The man behind, creator of the fourth generation rpg-o-mania and still a good friend.

Sascha (1998)
Another techincal genius with lots of constructive ideas throughout the whole lifecycle of rpg-o-mania.

Mr. X (2001)
Ambitious to the core, just stupid me wasn't as ambitious those days.

Zargkhon (2002)
Good guy who submitted tons of self made wallpapers.

Vio (2003)
Staff member who submitted lots of articles, not to mention that he's a dang reliable friend.

Row-T (1998)
A good friend, always helped me with this page when I needed his opinion.

Catfighter (2000)
A pretty cool guy with lots of good ideas.

Bowie (2000)
I met him by chance at the Shining Force central, but since then he's been one of my best friends and a supporter of rpg-o-mania

Kilu (2000)
Metalhead from Finland, talented tracker and supporter of the page.

Jeff Lipeles (2000)
The webmaster of former game-place.com, also had many words of advice for me.

Yukito (2001)
The webmaster of rpglair.com, a good friend with lots of motivating ideas.

Kireek (2002)
Claimed to be an Italian girl and submitted lots of art.

Dune (2006)
Helped me to improve the design, not to mention that he's a good friend.

Disa Økland (2019)
Answered many questions about mapmaking and was the first interviewed person at rpg-o-mania.

Kaoru (2019)
Expanded the retrospective section with games I didn't know much about.

Dark Siren Sally
They were one of the first people to help me improving rpg-o-mania by giving some good advice.

Wolfgang Landgraf
Webmaster of the incredible "home of classic role playing games", gave permission to use some of his great works.

Moogie
Webmistress of the Shining Force Central, gave me certain hints about the page and created the opportunity to meet my good friend Bowie.

You
For reading this and appreciating the work of many people.

Thanks for reading. Thanks to all the people who worked with me to have this page up and running! Let's keep rpg-o-mania going on for many years and expand this list!