Among japanese game producers, Game Arts is known as one of the best ones. Its popularity in Japan even rivals bigwigs such as Square or Enix. Even in the western market, the reputation is very good - There are only few gamers who actually dislike "Lunar" or "Grandia". The company was founded in 1985 and has created many different games until now - from Shooters like Silpheed to grand RPGs.

Although their non-RPG games are not so well-known anymore, Game Arts started as their career as a developer of shooting games. Among their first games was the shooter game "Thexder", which received lots of praise back then. Silpheed and Thexder 2 followed, staying on the action game line. Although there were another two Silpheed-games released on Sega's Mega CD (/Sega CD) and the PlayStation 2, Game Arts soon focused mainly on RPGs. 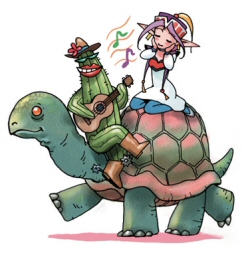 Their first RPG hit was "Lunar: The Silver Star" for the Mega CD was released in 1992, followed by an US-version in 1993. Lunar got a successor called Eternal Blue and a Gaiden sidekick. Yet, Lunar didn't turn out to be Game Arts' main series - 1997, as a Saturn-Counterpart to Final Fantasy VII, Grandia was released. Although it did not become as famous as Final Fantasy VII did, it was a very successful RPG that was converted for the PlayStation 1 later on. Two installments followed, loved by fans all over the world.

Game Arts RPGs usually have very complex storylines and memorable characters. This way, GA-RPGs have their own flair - not only story-wise, but the battle systems are usually more focussed on tactics than battles in other RPGs. Graphics are usually very Anime-like, supported by Soundtracks of Noriyuki Iwadare, who created almost every RPG Soundtrack since Game Arts started to produce RPGs.

Since you're currently browsing through a RPG-site, let us take a closer look at Game Arts' RPGs.

Game Arts produced only two major RPG series. The first one was Lunar, where the first part of the series was one of the first RPGs with lots of Anime sequences and extensive voice-acting. The story was focused on its protagonists. Gameplay-wise, Lunar Games until 2005 resemble the old Final Fantasies a lot, with the difference that battle scenes in Lunar are more tactical than in Final Fantasy. Lunar is also a RPG series where the amount of remakes exceeds the amount of original games. The first Lunar consists of one original game (Mega CD) and three remakes (Saturn, PlayStation, GBA). Although fans continued to beg for a new Lunar, Game Arts never granted that wish until 2005.

Instead of that, they pushed the development of the Grandia series, which is their second big RPG franchise. Grandia, just like Lunar, focuses a lot on character development and puts lots of heart into their games. The battle system, on the other hand is more dynamic than Lunar's. You still don't have to worry about real-time influences, since the game pauses whenever a menu pops up, but the action status of your enemies is an important part of your battle strategy.

Both RPG series are quite linear if you just want to follow the story, but you have a wide selection of bonus goodies (especially in Lunar 2 on the PS1) you can undertake if you want. Game Arts experienced some loss of popularity in the early years of the 21st century... Grandia Xtreme was not as good as expected, and there was no major Lunar game. Grandia III was published and supported by Square Enix, many Game Arts fans hope that this will mark the end of GA's little crisis.