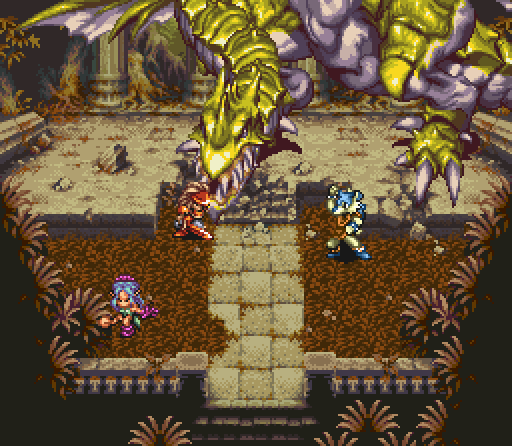 Seiken Densetsu 3 has an interesting approach on the story. In short, there are three main storylines that two of the games' six characters share respectively. The villains of each of the stories compete with each other, and in the end it's the main antagonist of the first character's story that turns out to be the most successful evil person. This in itself is cool, but it doesn't create an especially interesting boss fight for itself.

The most impressive bossfight I noticed was the Dragon Emperor, which is the last boss of the Angela / Duran storyline. And to be honest, it's just a tiny little detail that gives me goosebumps every time I play the game.

Like so many bosses, the last battle is fought in several forms of the enemy. The Dragon Emperor is no exception, although his form changes are more positions changes. All in all, a nice but fairly regular final boss fight. He's hard to fight, but I managed to beat him on my first try. Needless to say, it was still kind of an intense battle.

When the last fight starts, the music is made up of some percussion music. Various drums build up the atmosphere, and the only other sound you hear is the action itself. Slashes, punches, magic effects and the famous "dum-dom, dum-dom, dum-dom" when one of the characters reaches critical HP.

And then suddenly, without a big "now you see my final form" animation, the music pauses and turns into the epic music piece of "Sacrifice, Part 3". Now the music is dramatic and empowering - you can really feel that you're just a step away from the ending.

This gets me every time. You can see the battle in question on YouTube.

It's just a little twist to a regular battle, but a great one nonetheless.